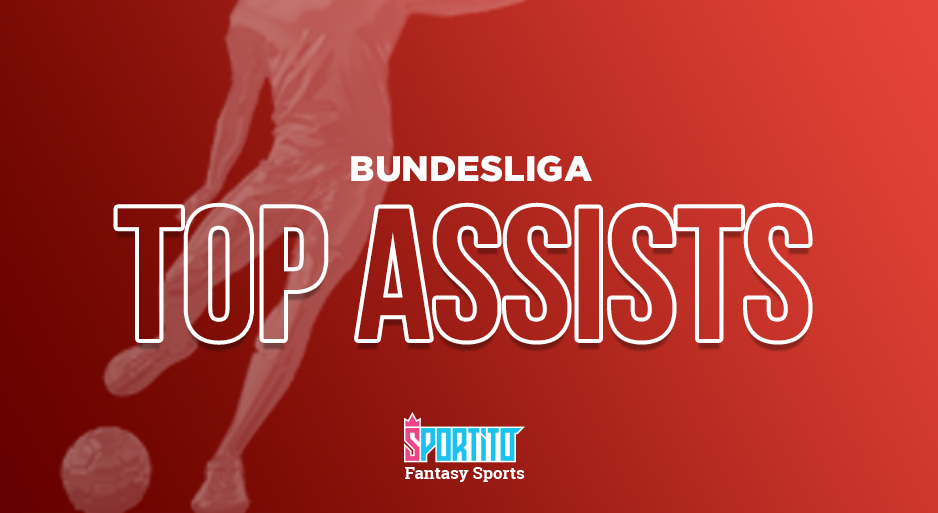 For lovers of the Bundesliga fantasy game it is very important to know the best assist men of the German championship. From Muller to Sancho and Plea, we discover the players who offered most assists in the Bundesliga 2020/21 , the winning passes that lead to the goal in the current top German championship. Do you play Bundesliga Fantasy Football? If your answer is a big “Yes I do”, then you definitely need to view the Bundesliga top assists rank in order to build a winning fantasy lineup. Here you have the top list of the top assists Bundesliga 2019/20 updated every week. On Sportito you can play Fantasy Football Bundesliga and win real money every day

What is an assist in football match? The assist is contribution by a player which helps to score a goal. Statistics for assists made by players may be kept officially by the organisers of a competition, or unofficially by, for example, journalists or organisers of fantasy football competitions. Assist bonus at the Bundesliga fantasy football can be decisive for winning in Sportito contests and tournaments. In the Bundesliga championship, after 3 rounds, here is the top assist man in Germany with the number of winning passes served in this German season. Among the top places in the ranking of the most assisted players in the German championship are several players from Borussia Dortmund and Bayern Munich, who are the two teams at the top of the ranking of the best attacks. There are also several surprises, such as Hofmann of Monchengladbach and Augustinsson of Werder Bremen. In our site you can find guide to fantasy game of Bundesliga. Who is the most assist player in the Bundesliga this year? Are Hofmann, Muller and Reyna with 3 assist after 3 gameweeks..

BEST PLAYERS FOR ASSIST IN GERMANY

In lasta season the best Bundesliga player so far is Thomas Muller, one of the best players ever appeared in Bundesliga history, with his 20 assists. 16 are the assists made by Jadon Sancho of Borussia Dortmund, a big climb in the rank for the Brit who is now second. The third best player is Hazard from Dortmund with 13 assists, a great season for the Belgian midfielder. As you may have noticed two of the top assist players in Bundesliga are wing-backs. When you build your Bundesliga team always try to choose some of them as they worth as much as an offensive midfielder. In the table below you can find the best players for assist in Bundesliga 2019/20.


If you play Fantasy Football Bundesliga on Sportito you can pick all these three assist leaders as you have an unlimited budget to build your team. Sounds good, isn’t it?

Now let’s have a look at the assists’ ranking from last season to understand how your favourite players are performing during the current season compared to the last one. Know best players for assist in the last Bundesliga can help you to discover players performances from last season to this German Championship.

Are you ready to win money thanks to your Bundesliga knowledge? Now that you know all the best Bundesliga assists 2019/20, sign up on Sportito. Start playing Bundesliga fantasy as a champ.