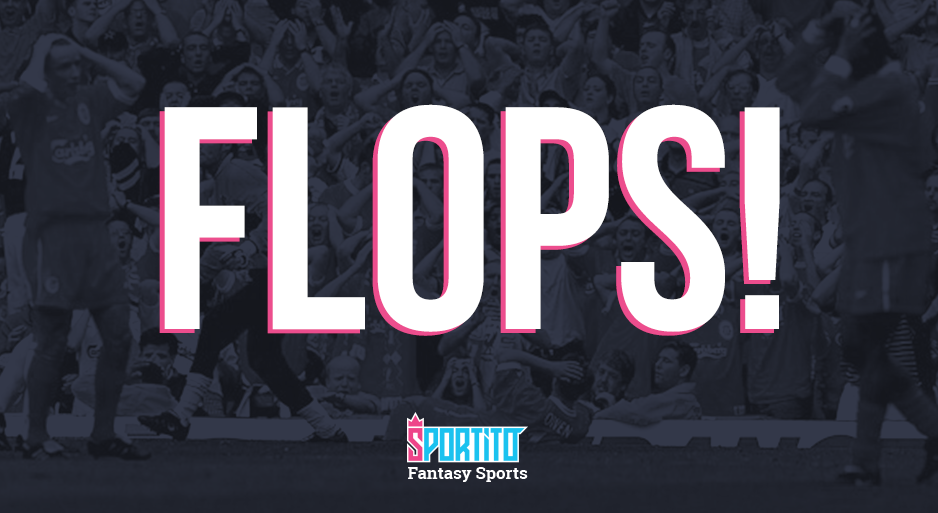 If you’re an avid player of the Fantasy Premier League 2021/22, then you are probably either happy with your team or completely devastated at the end of the season. It happens every Fantasy Premier League season as you have high hopes for some players, real beasts in the previous season (which inherently caused you to choose them for your fantasy team), but at the end they have failed and proved to be total flops. In order to avoid picking again these Premier League flops for your fantasy teams, unless they don’t finally show their potential, we have created a number of lists. One of these rankings originates from the present football events and two that arrive from the past, close and distant. In this article you can find the 10 most disappointing Player in fantasy Premier League 2021/22 and previous seasons with the biggest flops FPL. In our blog, you can check guide with best strikers in Premier League.


We are mentioning the 10 flops of the current season so far and the ten not-so-honourable picks from the last Premier League seasons according to the EPL statistics. Please note that these players have achieved this reputation only because of their bad performances on the field, personal feelings did not play any role here even if some of these guys broke indeed my fantasy manager’s heart more than one time. Finally you will able to view the players who had the dubious merit, in my humble opinion, of having their name in the ranking of the worst flops of the last ten years.

Flops Premier League, the worst players of the season 2019

Disappointment and Flops players in Premier League. In this paragraph we offer the 11 worsts players of first part of fantasy football Premieship:  players paids a lot during the summer auctions, offered semi-disastrous returns, making the investments made to have them vain. Now, the list with the most flops in Premier League first part of season.

The Iranian became the Seagulls’ record signing when he joined from AZ Alkmaar in July but unfortunately his career has failed to take flight, another example of an Eredivisie player who has struggled to adapt to the English game. The winger contributed to no less than 33 goals in the Netherlands, but last year his time at the AMEX Stadium has been far less fruitful.

In the summer of 2018, Everton has signed the Colombian central defender Yerry Mina, £27.2 million was the price requested from Barcelona. It arrived after an impressive World Cup with his national team and Everton fans were pleased with the signature, but his first 12 months on Merseyside were not what they should have been, to be honest the current 19/20 season is looking like a different movie.

The Arsenal defender has too often proved a defensive liability, last summer Gunners’ fans were hoping to see Shkodran leaving London for a different city but their hopes crashed when this event didn’t happen. On the face of the evidence the signing of Mustafi for £35m has been a complete masterstroke, a player Arsène Wenger still regrets having chosen.

Everton’s forward won’t exactly be remembered for his performances. At least not in a good way. A total of 21220 minutes played and only 5 goals scored is atrocious, to say the least. Only 2 goals scored in the second part of the season and 0 assists. That’s how detrimental he was to the team.

Another disappointment in Fantasy Premier League is Phil Jones. The defender from Manchester United hasn’t managed to impress anyone and his points tally is low – only 17. Similarly to Mustafi, Phil has played many 90-minute games without leaving a positive mark on the audience.

West Ham’s Wilshere hasn’t played a lot of minutes for the team, only 389, but even when he has, he hasn’t done much. An average player (some would even argue he’s bad), and 0 goals & 1 assist during last season. He did, however, bring some points to Fantasy Premier League managers.

The man behind many goals in Serie A in the past and in the current season, and the man that Chelsea thought would help them overcome their striker woes hasn’t impressed. Even though he’s not the worst of the bunch, he still hasn’t lived up to expectations, only 5 goals for him during his EPL days. Not bad, but not up to snuff.

Red Devils’ forward has managed to score only one goal during the entire season, even it must be said that he played in few matches. The only ’bright’ side of him is his points tally – 34. If one can call that a bright side. He is currently playing in Italy, usually injured, a sad event for Antonio Conte.

Not truly a shining pick of the fantasy premier league, Joe Hart didn’t manage to change people’s opinions either. For the 1710 minutes he played last season, he managed to concede a total of 41 goals to his opponents.

There’s is not one thing about Christian that’s redeemable. Only 1 goal and 1 assist for a forward and poor play all around never put Benteke into the limelight.

THE 10 GREATEST FLOPS OF THE LAST 10 YEARS