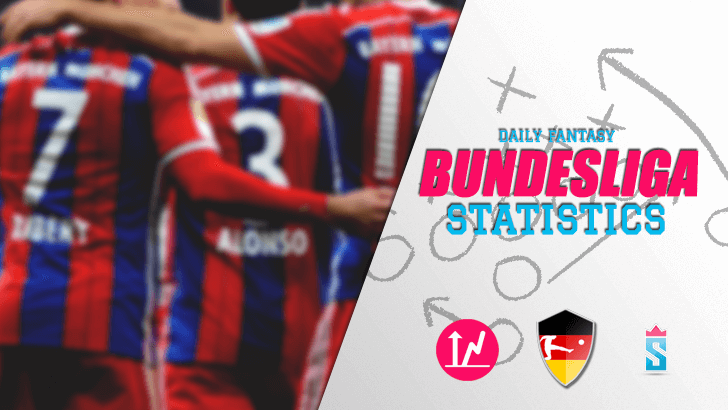 The Bundesliga is ready to restart with 8th round: Bayern is on top of Bundes ranking with 18 points after victory against Borussia Dortmund in 7th gameweek. In this page you can find all Bundesliga stats to discover best players and teams for fantasy game with german matches. In our site there is a special guide about best assist players in Bundesliga. If you are a football lover follow our stats and tips about a Fantasy Game Bundesliga to know best players and teams. Then, see our next contest and play with Sportito.

Now we offer the program and matches of upcoming Gameweek Schedule of Bundesliga to buy best player in Germany and the best teams to play at fantasy game with german championship.

Joshua Kimmich – Bayern Munich
Bayern Munich quarterback is the rising star of Bavarian and German football in general. At 25, he is one of the pillars of Jupp Heynckes’ team, a must have player that they can’t do without. Both in the Bundesliga and in the Champions League, his input is going to be key to Bayern having a good season. His style of play and his versatility has drawn comparisons and, is viewed by many, as the heir of Philipp Lahm.

Mats Hummels – Borussia Dortmund
At the age of 31, there are some that argue Hummels may be entering the twilight years of his career. But his experience and maturity still mean that many people consider him as the best Bundesliga defender this season. There are very few rivals in Germany and in Europe playing in the role of central defender. This might be why Manchester United was so keen on signing Hummels. Thankfully, for the Bundesliga he chose Borussia Dortmund instead.

Jérome Boateng – Bayern Munich
In the last couple of seasons he has been hampered by injuries, which have diminished his involvement on the field. However, he remains, to all intents and purposes, an important player for the Bayern team. Since his return to Germany, to wear the shirt of the Bavarians, his career has risen and despite the physical problems, he remains an absolute top performer attracting interest from some of the world’s biggest teams.

David Alaba – Bayern Munich
Alaba’s versatility is one of his key strengths. He can play at left back, midfielder or if necessary, as a central defender. He is consistently being linked with the best teams in Europe looking for a versatile player who’s rich in quality. What’s more, in addition to his skills in attack and defence, he is also very talented at free kicks thanks to a powerful left foot.

Amine Harit – Schalke 04
The young French player is of Moroccan origin and is one of the stars of Schalke 04. There’s potential here, however he now needs to re-energise his game and build on last season’s 18 appearances and 1 goal. A good bench option though.
Marius Wolf – Borussia Dortmund A player originally from Eintracht Frankfurt with proven Bundesliga experience. Fans feel his reliability has really delivered surprising results during the last two seasons by recording 51 appearances with 7 goals.

Alfred Finnbogason – FC Augsburg
A true globe trotter, the 30-year-old striker has worn the shirts of Breioablik, Lokeren, Helsingbord, Heerenveen, Real Sociedad and Olympiakos. Last season Finnbogason was one of the best players in the Bundesliga thanks to his goal scoring abilities – 11 goals delivered in 18 appearances. He has been at FC Augsburg since the 2015 season, so has now settled in. Can he now rise to the challenge and beat his best

Erling Braut Håland – Borussia Dortmund
Last but absolutely not least the Norwegian wonder who arrived as a meteor in the Bundesliga this January. At the age of 19 he has already scored 61 goals since he has become a professional and 12 goals already as the number 17 of the Schwarzgelben. This boy is a true wonder who is breaking record after record, You must absolutely pick him as your first choice of your fantasy lineup whenever it’s possible, a bright future awaits him but the present is already incredible. The Norwegian striker from Borussia Dortmund taken from Salzburg, suffered a knee injury. The striker left the limping field yesterday in the 27th minute of the second half, after a clash with referee Tobias Stieler during the match against Bayern Munich. “It’s a knee injury and we don’t know the extent of it,” coach Lucien Favre said at the end of the game yesterday

Bayern Munich won the Bundesliga in the 2018/19 season, finishing on 78 points. Dortmund was Bayern’s closest challengers finishing 2nd on 76 points in a superb season for the club. The remaining positions in the top four were held by RB Leipzig in 3rd place with 66 points and Bayer finished 4th on 58 points

The Bundesliga is indeed home to lots of young, talented players and some of the world’s best teams. The outstanding levels of talent, and the Bundesliga’s rich history, make it one of the best football leagues in the world. Build your Bundesliga team on Sportito and win money. You should enquire who will be the best Bundesliga picks for your customised fantasy team. Not all teams in the Bundesliga have the best players, so you should take a minute and familiarise yourself with the Bundesliga’s top players.

Sportito wants to guide you in the right direction and help you to build the best Fantasy Bundesliga team. Read the article below to find out who would be the best picks from different teams of Bundesliga and which teams are worth selecting your players from.

Bayern Munich
Bayern are the clear favourites to win the Bundesliga again for the 8th consecutive season. The main man at the Allianz Arena is Robert Lewandowski, who has been with them for seven seasons. The Polish striker has scored 199 goals in 258 appearances for the Bavarians. He is a must pick for the Bundesliga team this season.
Lewandowski is backed up by an array of attacking talent, which includes Thomas Muller, Kingsley Coman and Leon Goretzka – all players have already scored a goal or two since the start of the new season.
But Bayern has seen players such as Arjen Robben, James Rodriguez (loaned from Real Madrid), Frank Ribery and Arturo Vidal all leave this summer. The question has to be – will this be a season for rebuilding at Bayern? Potentially.
Philippe Coutinho, from FC Barcelona, just signed a €8.5m loan fee for a single season.
The Reds still have a rock-solid defence, conceding just 32 goals last season (lowest in the league). Jerome Boateng and David Alaba are the key players that you must include for the contests with Bayern Munich. They are backed up by arguably the best goalkeeper in the world, the imperious Manuel Neuer.

Borussia Dortmund
Dortmund has set high expectations for themselves by finishing 2nd last season, 2 points shy of Bayern’s total. The exciting young English winger, Jadon Sancho, continues to prove that leaving Manchester City was the right choice for his development. 34 Apps, 12 goals and 2 assists in the 2018-2019, makes Sancho a must pick.
Marko Reus had a good season, (27 Apps, 17 Goals, 3 Assists) scoring a number of winning goals in extra time. Mario Gotze continues to impress in Midfield with 7 goals and 2 assists, from 26 league appearances. Eden’s younger brother, Thorgan Hazard, has also been signed this summer after achieving 23 caps/ 3 goals with Belgium.
In defence, the reliable Mats Hummels joins from Bayern and is a strong pick for your Sportito XI. Fellow countryman, Nico Schulz, who already has 8 caps / 2 goals for Germany will be looking to anchor his name on the team sheet this season.

RB Leipzig
Leipzig completed their 10th season in the Bundesliga which saw them finishing an impressive 3rd.
Their star players are striker, Timo Werner, who scored 19 goals in the 2018/19 season, and midfielder, Emil Forsberg, who continues to register some impressive assists stats – 22 assists in the 2016-17 season was his highest achievement to date.
Another top player in the Leipzig midfield is Marcel Sabitzer, who has already scored a goal and got himself an assist in the first game of the season. The highly-rated Jean-Kevin Augustin was signed from PSG to bolster the Leipzig attack. Without a doubt, Leipzig is one the top Bundesliga teams with talent from front to back.

Bayer Leverkusen
Bayer Leverkusen qualified for the Champions League group stages on the last day of the season, thanks to their impressive forward line of Kevin Volland 42 apps / 15 goals, Lucas Alario 36 apps / 14 goals and Julian Brandt 43 apps / 10 goals.
Midfielder Kai Havertz scored 17 goals in the 2018/19 season and is tipped to be the next global super star of the league. Jonathan Tah was steady in defence last season making 38 appearances in all competitions and contributing 3 goals, but only 5 clean sheets.
Aleksandar Dragovic had a good first season in the Bundesliga last season, 24 apps / 1 goal, but with the departure of Aleksandar Dragovic to Leicester City on a season long loan, he will no doubt be looking to make the most of this opportunity this time around.