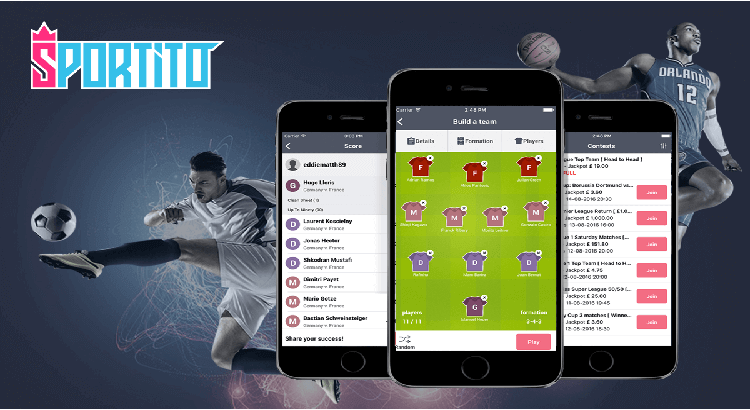 Ever since the day we created the first fantasy contest to fill our football lobby until now one thing has remained always the same: playing Daily Fantasy Sports at Sportito is super easy and fun.

Thanks to our very user-friendly platform, it is a breeze to find all the important info you need to discover and enter Contests and get all the necessary details you need in order to play, and play with confidence.

Our interface makes this possible through “Sportito Contest Card”. When perusing around our Lobby – the place where you can find all the Contests we are running – you can click on any Contest and a Sportito Contest Card will appear to the right of the screen. Here you have all the information you need to make the best choice, in order to start playing and winning.

IT ALL STARTS IN THE SUPER FANTASY LOBBY

Find All Contests and their Cards in the Lobby:

Here at Sportito, every Daily Fantasy competition we run is called ‘Contest’. All contests can be found in the Lobby section, when You reach the page you will have the following view:

We have created a truly intuitive logic map with each sport, league or category maked by its own card. By clicking on each card You will be directed to all the events based either on on a single sport or a single league like Premier League or Championship.  If You prefer to view all the contests currently available on our Lobby simply click on the SHOW ALL button and the following page will show up:

As you can see, this is where our Fantasy Sports Contests can be found in their entirety. There are five columns describing the features of each contest: Contest Name, Entries/Size, Fee, Prizes, Starts (Starting Date) and Status.

Each column is self-explanatory. The Contest Name is obviously the name of the Contest. In order to find contests in a particular league or tournament, use the filter ‘Filter by Tournament’ just under the heading, Contest.

The Fee is the cost to enter the game and the Prize shows the total pool of prize money. This money does not necessarily go all to the winner as it may be shared in the cases where there is more than one winner. 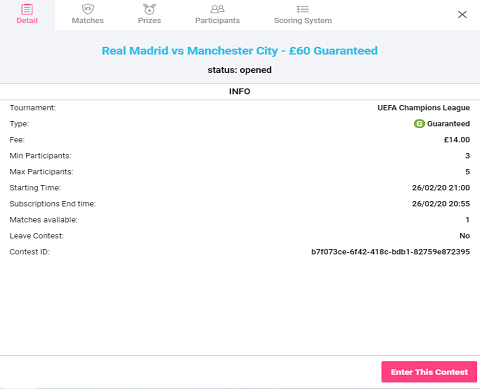 A CLOSER LOOK AT THE SPORTITO CONTEST CARD

The Detail tab on the Sportito Contest Card lists the following information:

The Tournament refers to the competition, league or cup on which the Contest is based.

Every contest has a minimum and maximum number of participants and this is what the next two bullet points, Min/Max Participants refer to.

Following these, the Starting Time for the competition is listed as well as the Subscriptions End time, which refers to the final date and time that entries can be submitted.

Matches Available refers to all the matches involved in the contest. For example, with the FA Cup final, there is only one match so only match is listed. But, as another example, if a contest was created for just Round 1 of the English Premier League, then there would be 10 matches involving all the 20 teams.

Leave Contest refers to whether or not participants are allowed to leave the Contest after having signed up for it.

The final point listed is Contest ID where the specific alphanumeric code for each contest is shown.

This section is fairly straight forward. Whereas in the Detail Tab, as described above, lists the number of matches involved in the Contest, under the Matches Tab one can find all the actual matches to take place in this Contest + all the stats provided by SportRadar on each event: 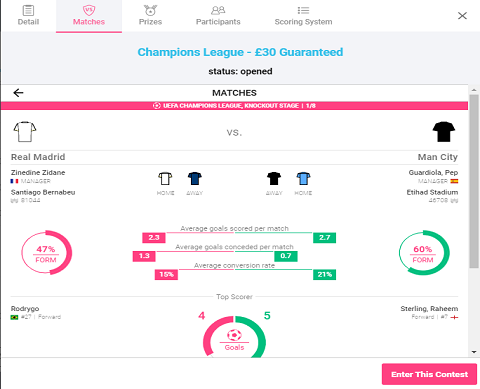 Another great feature that has been recently added is the presence of the official lineups before the start of the matches, see for example the following image: 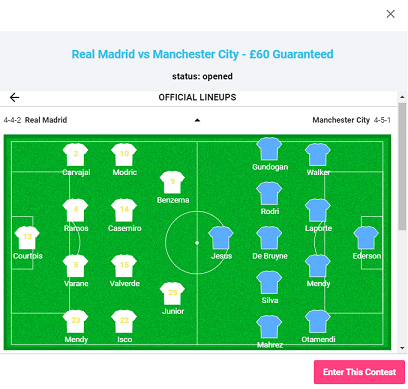 Perhaps the most important and exciting piece of information for players. How the prize money will be awarded to the winners of each contest is listed here under the Prizes tab.

Whereas in the Lobby the total prize pool money is listed. Here under the Prizes tab it is displayed how this prize pool will be divided between first, second and third place or however according to the structure of that particular contest. For an example, see below. 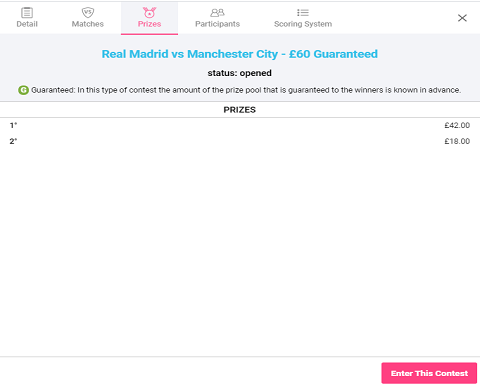 The second to last tab in the Sportito Contest Card is Participants. This is even simpler than the previously described tabs. Here under this Tab all participants who have signed up for the contest have their Usernames listed.

The last tab is possibly the one with the higher number of information as all the rules of the specific sport, on which the contest is based, are listed. Each action of the scoring system with its positive or negative value is shown inside a comprehensive chart in order to help our managers when picking their favourite players.