10 Mistakes You Must Avoid when playing Fantasy Sports 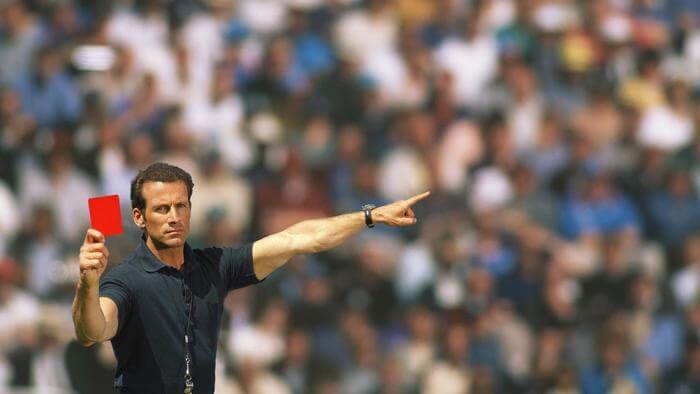 Playing Fantasy Sports seems very easy but hides many difficulties. In this article we offer the list of the 10 worst mistakes to avoid in fantasy football. Try following our tips and your chances of winning will increase. There are various fantasy sport game but the mistakes are possibile always. You have to avoid for win. A significant number of Sportito Fantasy players are making assessments of their team’s chances, so we thought we would assist 10 Mistakes You Must Avoid when playing Fantasy Sports. For first, we suggest to check next contest on Sportito for play with real money.

Fantasy Sports players has a personal strategy and can play how they want but there are some mistakes that they avoid for increase chances to win against friends or other players. In this paragraph we list 10 worst mistakes to avoid in Fantasy Sport game: from injured players to Signing players with a tendency to get sent off.

Failure to replace an injured/suspended player

At this stage of the season, you can’t afford to have injured players within your team. It’s best to stay up to date with the latest injury and suspension updates in a bid to avoid having players in your squad, who can’t perform on the pitch because they have suffered an injury or are suspended. Once you have identified an injured player, make sure you select a suitable replacement for him. For example, if a player like Sergio Agüero gets injured, you could easily acquire Harry Kane.

Never bet on the players of your favorite team

This is simple, we will already be pissed off a lot every Sunday for fantasy football when your opponent will be scored twice by the third bench defender who will enter the field due to a strange astral conjunction, let’s avoid it being double because your team sucked. We have to play with reason not with heart.

No sentimentality towards the players that you had last season

I recommend it is very important, if last year every time you fielded a player you won and you consider him your talisman and you have been waving it around since last February, do yourself a favor, shut your mouth when it is time to offer, probably no one will want it, but if others find you want your talisman it will be a very expensive purchase.

The best advice is – don’t! Hold fire and wait on news updates about injured players to confirm the extent of their injury and whether they’ll be playing for their respective sides. We know how annoying it is to substitute an injured player, only to find that they are selected to play and bag a load of points in the subsequent GW.

Selecting the right players for the right GW, is more important than ever.  Did anyone miss out on the points haul from Raheem Sterling in GW1? Then Lucas Digne in GW2? And Teemu Pukki, in GW3? You need to be alert to changes in form, changes in personnel, fixture lists and opposition players. For example; Roberto Firmino, a Brazilian international, has had a slow start to the season. You would expect his performance to improve very soon, but he is facing a tough Burnley defence in GW4.

Picking players for the wrong reasons

Don’t include a player in your squad solely based on word of mouth or an unsubstantiated article you have read. Optimism is a good thing, but it should be based on research about individual performance not just because the player is in your favourite team. Do your own investigations and pick the right players for the right reasons. When in doubt, always revert to the data. Pose these questions. Who is in good form? Who has a nice run of games, going forward? Who has proved to be a threat in the last GW and is now hungry to turn near misses into goals?

Retaining players with a poor points per game record

This is one of the most common Fantasy Premier League Mistakes; keeping players who almost never score or assist for their respective sides. Such inaction is outright detrimental to your Fantasy Premier League campaign. Why have a player like Hamza Choudhury who hardly scores or assists, when you can get midfielders like Daniel Ceballos or Alex Oxlade-Chamberlain for similar money. These two players are far more attack minded.

Having a goalkeeper just for saves

The likes of Rui Pedro dos Santos Patrício and Nick Pope have become popular goalies amongst the Fantasy Premier League sphere for their impressive record of saves since GW1. Our advice is to avoid selecting your goalie by how many saves he can make. This is quite dangerous as he could easily concede a handful of goals in a single game. We would suggest a quick review of the clean sheets, a rarity amongst goalkeepers who are regularly tested on the pitch.

There is an array of talent on most team’s benches, but if all they do is keep the bench nice and warm, why waste a pick? This is another common mistake in Fantasy Premier League and can sink your chances of winning.

Signing players with a tendency to get sent off

A red card reflects poorly on your Fantasy Football campaign; it also causes you to lose points, so it’s best to avoid players who are regularly sent off by the referee. Don’t pay the price for their poor judgement or bad luck.

PLAY NOW ON SPORTITO: THERE ARE SPECIAL CONTESTS TO JOIN

Mistakes at Fantasy Sports: what not to do at the beginning of the season

There are some special mistakes about the beginning of the season. In this article we explain worst mistake at fantasy Sports in general but in this paragraph we talk about worst mistake before the season, when you decide to bet on some players.

There are users that bet on players of promoted teams. These players had good performances in previous season, in tournament like Championship. But in Premier League, they can suffered first division and can enter in biggest flop of FPL.

Each season is a different. A striker that scored 20 goals in last championship, probably in the new season he will be less useful for you new fantasy sport team. Except big champions like Vardy, De Bruyne and Salah.

Young players are target for many users at fantasy sports but are unknowns. You don’t have idea about minutes on field and future performances. Is better pick players that you already know.

PUBLISH YOUR COMMENT ABOUT WORST MISTAKES AT FANTASY SPORTS